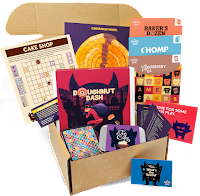 A Buzzle Box is a veritable treasures trove of board games and puzzles (conflation, ‘buzzle’) from publisher Dark Imp Games. Through her social media presence, it’s clear to see that founder Ellie Dix is passionate about bringing board games to families. Her Buzzle Boxes are just one of the products that are designed to provide huge amounts of activity for families to enjoy together.

Opening up our Doughnuts & Cake Buzzle Box was very much like being a kid at Christmas. In a sustainably minded way, the outer box is the box in which your collection will be posted and inside there are many treats to discover. The first thing I noticed where all of the doughnut stickers hidden all over the box and contents, which for a series of word puzzles to figure out. The box also has a couple of larger puzzles, including a word puzzle and a logic puzzle. I found these puzzles genuinely hard, so I hope they’re more aimed at the older members of the family! Then there’s a pack of three activity cards – two that give the rules to games that can be played with a standard deck of cards and one for a pen and paper game. These are a great bonus to give the box even more entertainment content! Of course, for us, the focus of the box is the three new games – Top Cake, Doughnut Dash and Sleuth Box, which we’ll give a brief overview of here.

Top Cake is an auction-style card game in which you bid to win cakes which can then be stacked to create a tower of delicious, cakey, goodness. Each round there will be 4 cakes (and later one topper) available to bid for. Each player will take turn placing one card face up and one card face down to bid on the various different morsels. At the end of the bidding round hidden cards are revealed, any matching bids are discarded and the highest bid wins the slice. You also have 2 special cards that mess with the flow of the auction, once a game you can play a steal card to guarantee a win, while every round you can play a card that reverses the flow of the auction so the lowest bid wins. 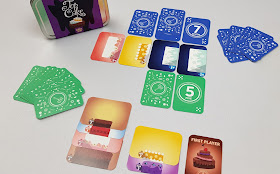 Top Cake isn't the most complex game, but while it doesn't have many mechanics it certainly has interesting ones. The half-blind auction allows for some great moments of surprise when you reveal your hidden cards and actively punishes predictable players. The scoring mechanics are simple, you can only stack so many cakes depending on the size of the cakes below. each cake is rewarded both on it's size and on how many cake segments with the same decoration are present. While Top Cake didn't bring anything I'd never seen before to the table, it is a perfectly respectable mint-tin game which I'd certainly be happy to play again.


In Doughnut Dash, each player controls two thieves who are trying to steal the most doughnuts from the factory. Doughnuts are not all of equal value though – chocolate, blueberry, strawberry lemonade, rainbow and ketchup (?!) doughnuts all score differently. Doughnut Dash is a simple game of programmable movement. Each player will simultaneously select one cards from a hand with North, South, East and West direction cards. Then players take turns to move both of their thieves in the same direction as far as possible until they either hit a wall or land on a doughnut which is collected. If you land on another thief then you steal the top doughnut from their stack. Most points at the end of the game wins. 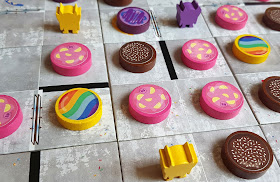 Doughnut Dash is very simple to pick up, but it definitely gets you thinking about how to move most effectively on your turn. The addition of the sugar rush cards which provide bonus actions, such as spinning the tiles on the board or jumping over doughnuts as part of your movement really add an extra layer when you are planning your turn. The game is good fun for adults, but could be an even better teaching tool for families to learn about programming and logic. It’s a great blend of the simplicity of something like Robot Turtles with more of the fun and game-like aspect of Robo Rally, but none of the frustration of being knocked off course by other players.

Sleuth Box may the the most portable game I have every played, This 2-player deduction game fits on a coaster, and the rulebook is the rear side of the coaster! The front of the coaster features 100 unique symbols in a 10x10 grid, each player will choose one of these symbols secretly and then take turns asking questions to try and deduce which symbol their opponent chose. Every turn you can ask your opponent whether they are near a symbol. They will answer positively if you have picked the right symbol, picked the right colour of symbol, picked a symbol within one space of their symbol, or picked a symbol in the same row/column of their symbol. What they will not do is tell you which of these clauses you met, you simply get a yes or a no. Over time your questions should narrow down where you think their symbol is at which point you can accuse them of being a symbol, if you are right you win, if you are wrong you lose. 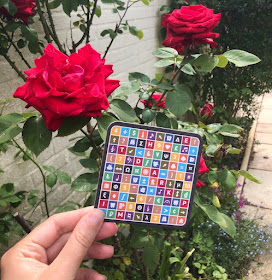 Often when I play a game I wonder if they could have trimmed the fat a little, removed a little rule which made the game that touch more clunky than it needs to be. Sleuth Box has trimmed so much fat off the deduction genre that it turned 2D! It's a quick, 2-5 minute, 2-player game that works fantastically and presents a decent challenge, particularly as you are trying to race your opponent. There's not much I can say against this little game, it is functionally near perfect. It's not going to change your life, but if you are looking for a quick 2-player filler game, or a place to put your drink, it's sure to please!

The Verdict
The Doughnuts & Cake Buzzle Box provides huge value for money for families. There are hours, week or even months of fun in the box, with a variety of quick puzzles and activities, all the way to well-designed family board games that wouldn’t be out of place in any board game collection. The games are extremely well presented, and the theme helps to make them enticing to a family audience, and the puzzles and additional activities are challenging enough to really engage parents as well as kids. If you’re looking for a gift for all the family that promoted family time, smart thinking and will ease boredom during lockdown and over the long summer holidays ahead, then a Buzzle Box would be a very wise purchase to provide something for everyone.


Buzzle Box 2: Doughnuts & Cake was a review copy kindly provided to us by Dark Imp Games. You can find out more at https://www.thedarkimp.com/shop/ and check out their awesome resources for getting families gaming.
Amy at Tuesday, June 16, 2020
Share