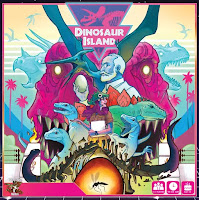 This year, I was very excited that by friends asked me what they should get for their 8-year old brother for Christmas. I came up with some great ideas, because my interests are probably pretty well aligned with those of an 8-year old boy - LEGO, games, toys and, of course, dinosaurs! Dinosaur Island was perhaps the first dinosaur themed board game we added to our collection, but it certainly wasn't the last as the theme really took hold over the last couple of years. Since we're always trying t control the size of our collection, we have tried to keep the number of dinosaur games down to a reasonable number, but Dinosaur Island and a couple of others always survive the cut.

With the 2nd edition, Pandasaurus Games have added more unique dinosaur meeples to the mix. If you're not already sold by the dinosaur meeples, then read on to find out more about psychedelic game game of dino cooking.

The goal of Dinosaur Island is to make your park exciting in order to attract pundits, and then keep your security high enough to prevent any intimate Dino-Sapien encounters occurring. Each game there will be a handful of objectives (with options for short, medium and long games with easier/harder objectives) worth bonus points for completing. Once all the objectives have been completed the game will end.
In order to achieve this goal you'll have to act appropriately in the different phases of the game. During the first phase the custom DNA dice are rolled and placed in a market. Each player has a group of three scientists numbered from one to three. On your turn you'll place a scientist in one of a few places. You can take a die, in which case you get the DNA shown multiplied by the number of your scientist. You can get a new dinosaur recipe/pen, the bigger herbivores and carnivores will need your higher numbered scientists to research. You can increase your cold storage, letting you hold more DNA at any one time, again the higher numbered scientists increase your storage by more. Finally you can tell your scientist to stop flaunting their degree around and work as an extra standard worker in phase 3.
In the games second phase players will have a chance to spend precious money on upgrading their park with new rides/attractions, building new staff facilities and hiring new staff. Each player will take a turn choosing one thing to buy or passing to get some extra funds. Rides/attractions typically allow your park to hold more pundits, new staff give you special powers and often more workers for phase three, while improving facilities will give you more powerful worker placement slots for phase three. 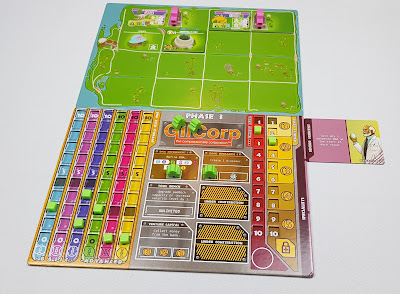 Once everyone has competed over new staff and rides each player retreats with their workers to their own grounds. This is a chance to make more upgrades, mix DNA and finally get some darn dinosaurs! Players can play simultaneously placing their workers on slots on their personal lab board. This lab will let you combine DNA into new forms, spend DNA to make new dinosaurs, making points and a more dangerous, but exciting, park. You can also expand your dino pens, giving more room for dinos and visitors, and you can increase your security. You'll want to do this as most people don't particularly like being eaten. Even worse the press sure as hell don't like it.
In the final phase of a round guest will finally come to your park. You draw a number of guest meeples from the bag as your excitement level. Yellow meeples will pay you for visiting and give you a point should they remain un-eaten, while pink hooligans will barge to the front of the queue, refuse to pay, and even have the indecency of avoiding death should any yellow meeple still be in your park! Once you've drawn your visitors you can place them in slots in your park. Next you'll check to see if your threat level (boosted by the threat on any DNA dice not picked this round) is higher than your security. If so one meeple gets eaten per point the threat is higher. After all casualties have been eaten a turn is over and begins again with phase one unless all three objectives have been completed.

Dinosaur Island is a homage to the 90s, when everything was radical, the turtles were mutants, and the parks, Jurassic. Of course you don't need to deal with a whiny tech-guy stealing your corporate information in a shaving can here. This is your chance to prove that a well maintained dinosaur park can be both safe and fun! You know. If you want to be boring.
Dinosaur Island provides an excellent structure to the game with clearly defined phases which each intermingle and give difficult choices. Taking that big impressive carnivore might bring lots of people to the park, but it requires your best scientist to research, which means you will be getting less DNA this round. You'll also need room for those pundits to sit, so you'd better build a cafe, but buying that means you have less money for security, and trust me a T-rex needs security! So maybe it'll take you a few turns to get that impressive dino, while your more modest opponents are churning out peaceful herbivores, less exciting perhaps, but a good way to get money trickling in while building up your supplies for the main event. Evey time I've played this game I've been more and more impressed by how great the gameplay flows and how every phase effects your choices in every other. Actions have consequences on Dinosaur Island, and consequences mean bad press, and a lowered meat bill for the season.
The art style is certainly something of an acquired taste, but one that I've found myself acquiring quite readily. This isn't your dark brooding dinosaur horror movie, but rather the prequel where everything is running... more or less smoothly. The bright colours are all so very evocative of the era this game is inspired by and while the bright pink dinos might not have been everyone's first choice there's no denying the quality of the components in this game. The second edition brings three types of dino meeple which is all you need to differentiate at a glance between small dino, large herbivore and large carnivore. The only complaint you can really have is that it that it's not as good as the Kickstarter edition, but that should be taken as more of a complement on the fantastic Kickstarter version of the game than an insult to the base game!
Dinosaur Island is, in a word, flawless. The gameplay flows so well, with easily understood phases that each have real impact on your future options. The player interaction is enough to keep it meaningful, without being outright hostile and the theme is captured is every single action you take. Do yourself a favor and pick up a copy!

Dinosaur Island obviously takes some of its theme from Jurassic Park, but the theme parks you're creating certainly feel a lot more like a zoo that the park depicted in the film. With food stalls like DNAchos (one of my personal favourites) and rollercoasters all around, mixed with the bright colour scheme, this certainly doesn't feel like a dangerous dinosaur breeding experiment - at least until your T-Rex gobbles up a few paying customers!
The size of this box, filled right to the brim with components may be an intimidating site and you might be anticipating a heavy game, but Dinosaur Island doesn't feel heavy to me. The gameplay doesn't feel over complex and feels quite intuitive, which is certainly helped by the theme. Got lots of dinos? - You're going to need more security. Want a T-Rex? - More security again! The fact that you can play a good portion of each turn simultaneously also makes sure you don't feel like you're playing a long game.

The new printing of Dinosaur Island falls somewhere in between the first printing and the Kickstarter edition in terms of its component quality, but there's certainly nothing to complain about - this game looks fantastic on the table and has great usability with its double layer player boards. In terms of the most exciting new inclusion - the extra dino meeples, they're certainly an improvement, but it's still a little sad that most dinos in your park will still be misrepresented - it's unrealistic to assume them all to be there, especially with a lower price point for the new edition of the game, but my brontosaurus is still a little sad!
You Might Like...
You Might Not Like...

The Verdict
8.5/10 Dinosaur Island is one of those games that seems to get better each and every time we play it. The combination of a turn based worker placement phase, followed by a simultaneous phase on your own player board is the perfect balance of enough player interaction and a fast-paced game. The theme, is, of course, a winner, which just gets better when twinned with great production and bold graphic design. It's a heavier game that feels surprisingly light and filled with fun on every play.

Dinosaur Island was a review copy kindly provided to us by Pandasaurus Games and Asmodee Games.
Fiona at Wednesday, December 30, 2020
Share